Because the Lindsborg Sesquicentennial, the 150th Year Founding  Anniversary, is being celebrated this year, SwedishAmericana is sharing a most fitting piece of information here coming from the late Dr. Emory Lindquist, the "Swedish Kansan."*  Dr. Lindquist, as fourth Swedish American Bethany College President in his 1953 book, Smoky Valley People, A History of Lindsborg, Kansas, writes in his second chapter, "The Coming of the Swedes," of the very time when Pastor Olof Olsson decided to go to the Kansas Smoky Valley with a group of pietistic Swedes from the Värmland area.

Here, Dr. Lindquist describes their immigration experience and Rev. Olsson's arrival, the period of which would most probably be considered as the official settling of the Swedish community of Lindsborg; and, especially so, with Pastor Olsson's founding the Swedish Evangelical Lutheran Bethany Church (today's Bethany Church) there on August 19, 1869.

The decision of Olsson to go to Kansas was clear. The missionary impulse, the quest for religious freedom, the adventure of building a religious community of a distinctive character, the urging of Christian friends combined with economic and social factors to fashion the background for the decision. He was only twenty-eight [28] years of age, with a future ahead of him. The letters from Kansas, portraying the need and the opportunity, impressed him. In a small study at Sunnemo, following consultation with his wife and friends and after serious prayer, the decision was made. Lindsborg came into being at that hour. 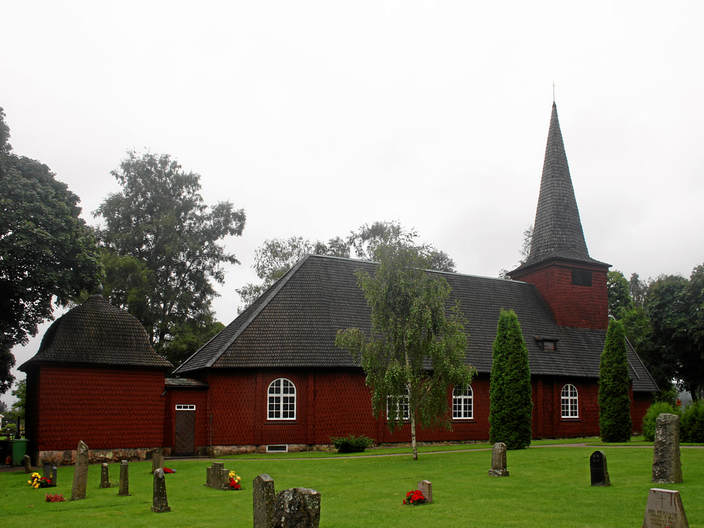 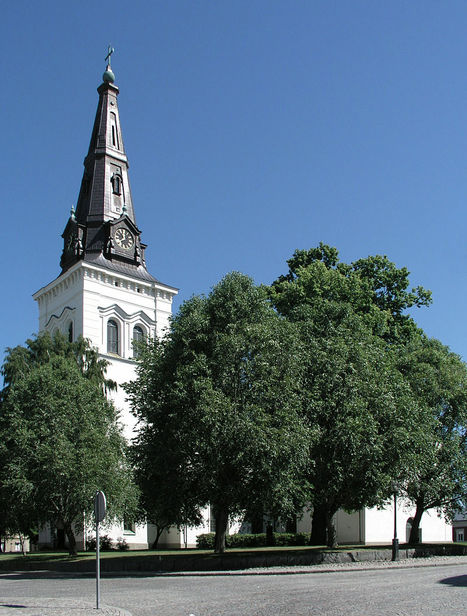 Sources: From Wikipedia. From Wikimedia Commons: Photograph by Håkan Svensson (Xauxa)
Carl XV, King of Sweden
c1895
The King who granted permission for Pastor Olsson to go to America. 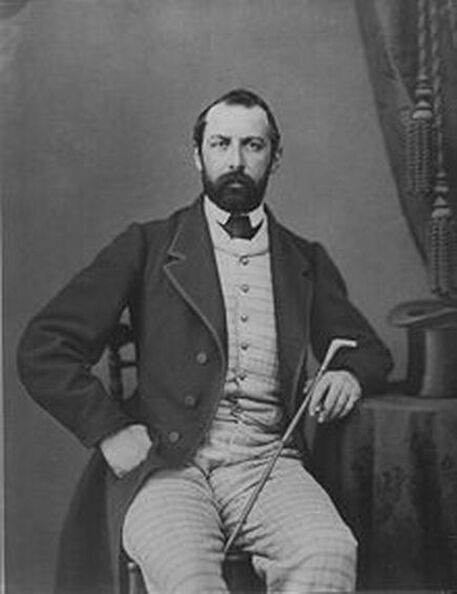 Source: From Wikipedia, photographed by Mathias Hansen around 1865
Many farewells had to be said during those spring days as Olsson made ready for the long voyage. On May 3, 1869, he parted from his good friend, C. G. Nyvall, at Sunnemo. Two weeks later he was at Göteborg.  At that place he had great difficulties with the port officials. The police accused him of being an immigrant agent. He had to clear himself of these charges, and, of course, he went free. In writing to his friend, C. W. Weinberg, on May 20, 1869, while still in Leith, Scotland, he expressed great bitterness at the attitude which had been assumed toward him.

The trip across the North Sea from Göteborg to Leith was rough, and while most of the passengers were violently ill, Olsson was spared the ordeal.  Mrs. Olsson and little daughter Anna were very ill. From Leith the party traveled by rail to Glasgow, where all the immigrants were sent to hotels, in groups of thirty [30] or forty [40]. The manager and his wife were exceedingly kind to the Olssons, and Mrs. Olsson was full of praises for their hospitality, although she suffered from the cold and damp climate.

On May 22 the Olssons and their friends boarded the S. S. Columbia of the Anchor Line, a steamship of 1,367 tons. There was great confusion as the 700 passengers tried to find their places, arrange their baggage, and get settled for the long journey across the Atlantic. Mrs. Olsson was ill when she embarked, and her illness, coupled with sick seasickness, made her so weak that when she attempted to stand, her husband had to support her. The 14 day trip seemed endless, especially to Mrs. Olsson. The storms were so violent that people were frightened. Olsson seemed calm, and fortunately he was well during the entire voyage and rendered comfort and assistance to members of his immediate group as well as to other travelers. The appearance of Pastor Olsson on the deck was always a source of encouragement to these seasick and homesick immigrants, who undoubtedly wondered if their decision to leave Sweden had been a wise one.  Life and death ­­accompanied  the immigrants. On the first day of the voyage a son, Charles Gustaf, was born to Johan and Maria Solomonson. Three days later Johannes Snee, age eighty [80], died. Eighty-one [81] of the 735 passengers were children of six years or younger according to the Ships List.  Included were the six children of Mr. and Mrs. Ole Anderson.  There were Bror, fourteen;  Anders, eleven; Martha, ten; Carl, seven; Ola, three; and an unnamed infant one year old.

- The ship line that Pastor Olsson and his group used to transport them from Glasgow to New York -
- S.S. Columbia - Anchor Line -
- to see the interior and hear the music of their day, "Castle House Rag" -
click HERE 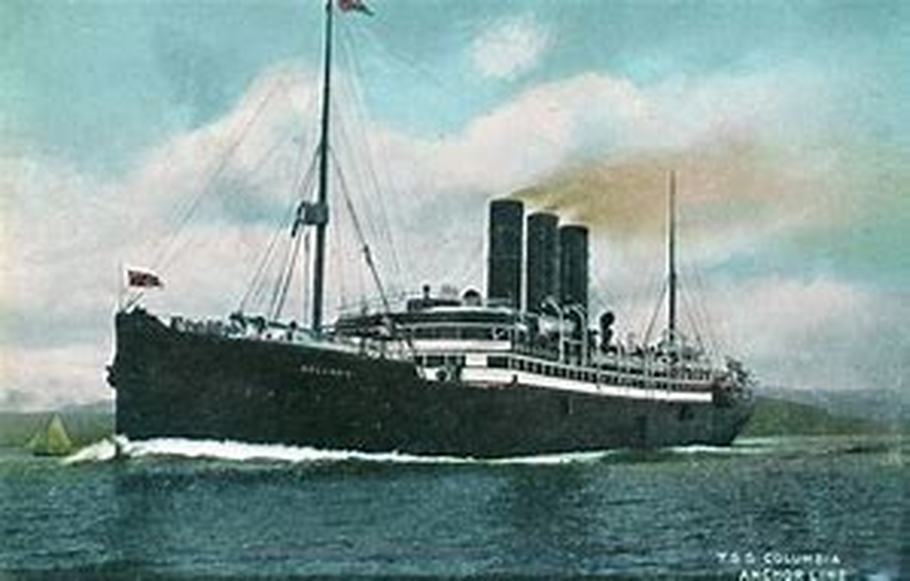 Source: Simplon - The Passenger Ship Website - www.simplonpc.co.uk
The long voyage came to an end on June 8 amidst great rejoicing. Olsson has written: “It was a beautiful June morning as we slipped into the harbor at New York. It was really a magnificent view from the ship. But what terrible bullies in Castle Garden. The stay in New York was the worst during the whole trip. I strolled around the finest and the poorest streets one evening. What sights during that little excursion! As soon as I got out of New York, I began to breathe easier. Yes, the further west I came, the more pleasant I found it.”

The trip from New York to Chicago was interesting. The speed of the express train, a good night’s rest on route, and the prospect of seeing friends cheered the tired travelers. In Chicago they were guests of friends including John Ferm, who was born at Storfors Bruk in Värmland.  The size of the city impressed the visitors from the quiet countryside of Värmland. Olsson met the Rev. Erland Carlsson, pastor of the Immanuel Lutheran Church, and the Rev. A.  W. Dahlsten, a fellow student at Upsala, and in the latter’s company attended the meeting of the Augustana Synod at Moline, Illinois. Olsson was present at various sessions and addressed a full session on June 22, using  the Twenty-third Psalm as his text. Mrs. Olsson stayed in Chicago and pointed out that the great festive Midsummer Day was not observed in America, and that she had spent the day sewing on a dress. She was quite fearful about the prospects in Kansas because the previous day a report, which proved to be false, declared that twenty [20] Swedes had been killed by Indians in Kansas.

On June 25 the Olssons said farewell to friends in Chicago and started the two-day trip to Kansas by rail. The Kansas Pacific Railroad brought them to Salina, twenty miles [20] north of their future home in the Smoky Valley. Many of their friends were already in Kansas since they had gone to Lindsborg directly from Chicago.

The trip for the Olssons from Salina to Lindsborg was made in a wagon hauling building materials to the new settlement.  Francis Johnson has described his first view of Pastor Olsson:

“The first time I saw Dr. Olsson was on the way to Salina. He sat riding on a load of lumber and was reading a newspaper. In Salina he had bought a slouch hat for a dollar.  ‘Here is the new Swedish pastor that just now is coming from Sweden,’ said the man driving the load as he introduced him. I thought: 'That cannot very well be much of a preacher, who comes in that matter.' ”

- A lumber wagon, most likely, similar to the one Dr. Olsson used to arrive in Lindsborg from Salina - 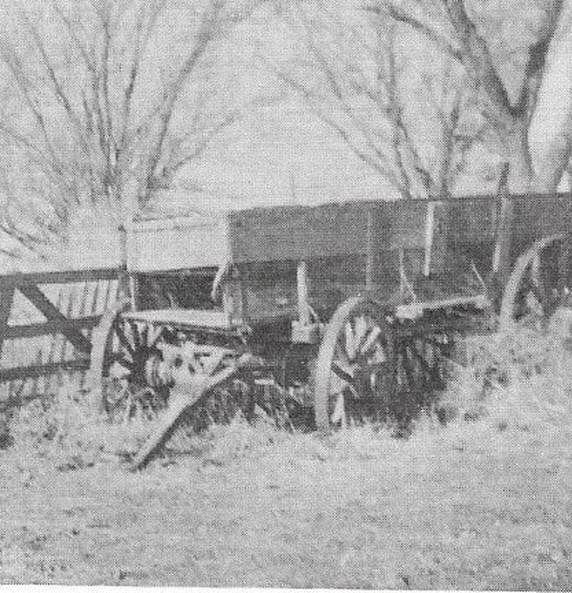 Source: "Pioneer Swedish-American Culture in Central Kansas" by Ruth Billdt, 1965
There was great rejoicing and gratitude in the Lindsborg community when the Olssons arrived at the end of the long journey. The members of the party who had gone directly to Lindsborg were there to greet them. Other people were also present to welcome them. There was C. R. Carlson, the former schoolmaster, who had been instrumental in urging the young pastor to come to Kansas. Other associates of by-gone days also greeted him with enthusiasm. A new confidence came to these immigrants at the sight of the pastor. Moreover, they realized that soon a congregation would be formed. They could worship God in the language which they knew and in an order of service familiar to them. Confirmation instructions would be available for their children, and the sacraments would be administered. It was the beginning of a new era in the Smoky Valley.  Many prayers of gratitude were uttered that June evening from dugouts, log-cabins, sod and stone houses. Pastor Olsson had arrived.
D u g o u t     L i v i n g
- Swedish Evangelical Lutheran Bethany Church -
First Church in Lindsborg built in 1869-1870
Etching by G. N. Malm 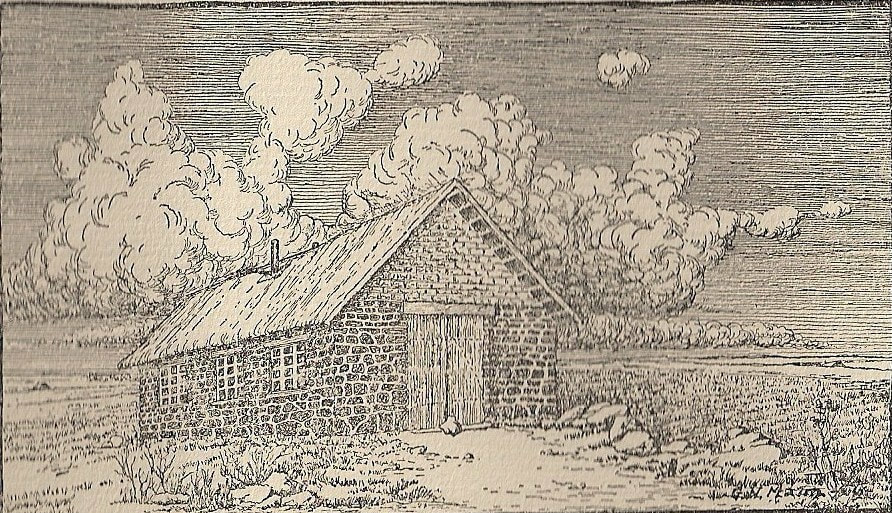 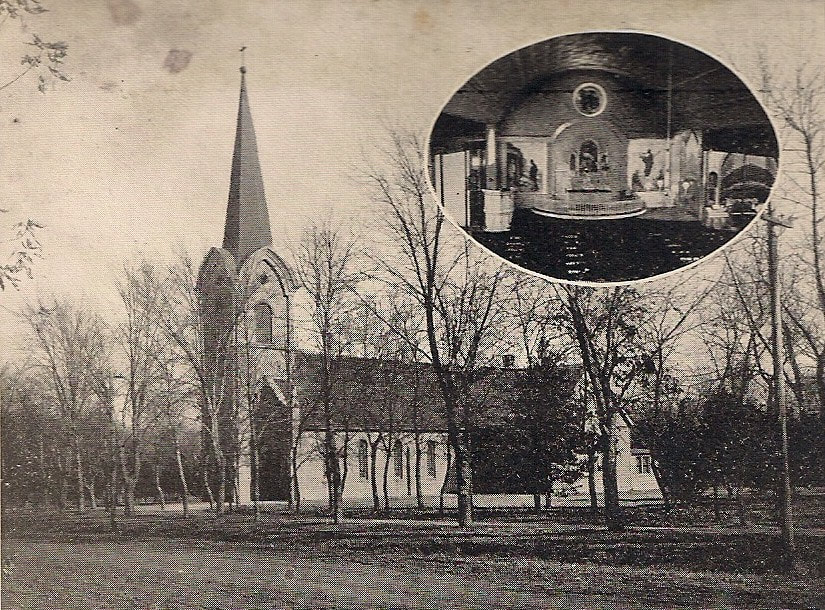 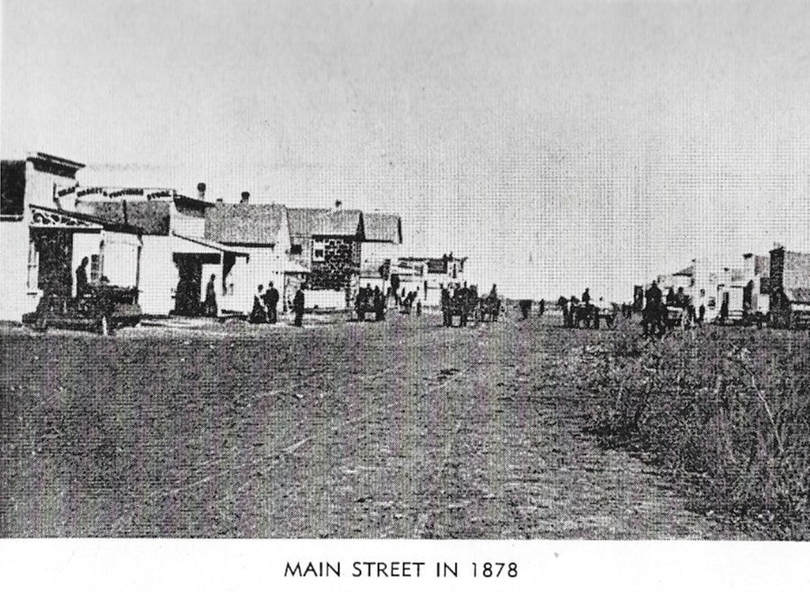 Source: "Pioneer Swedish-American Culture in Central Kansas" by Ruth Billdt, 1965
The first weeks and months were full of difficulties for the newcomers. Every effort was made by the Swedes already in the settlement to provide places for whole families until sod or stone houses could be constructed. Unfortunately, there is no way of knowing exactly how many Swedes were in the area when the large influx of immigrants occurred in June, 1869. On the basis of the records of the Bethany Lutheran Church, there were only twelve families and four single men in the Lindsborg community in 1868 who later joined the church. There were perhaps a few Swedes in the valley at that time who never joined the church. Several families came in 1869 before the arrival of the Olsson party. There may have been some twenty [20] Swedish families here by June 1869.
- 50 Years in Lindsborg -
A Group of Most of the Surviving First Citizens
c1919
(On the College Campus, they are posed on the steps of the Carnegie Library also called the Bethany Library.) 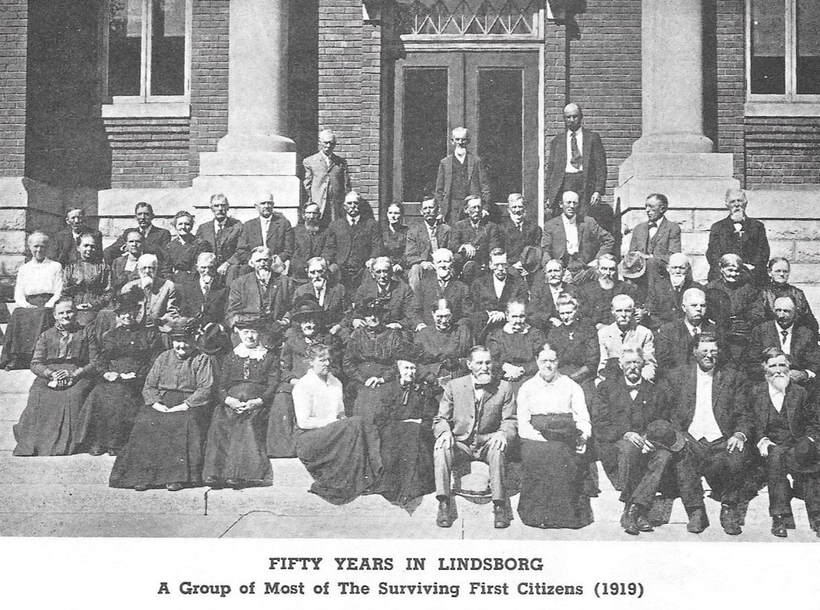 Source: "The Smoky Valley in the After Years" by Ruth Billdt and Elizabeth Jaderborg, 1969
The size of the Olsson party which came to Lindsborg is not known exactly. No documentary evidence substantiates the off–quoted designation of eighty [80] families or 250 persons which undoubtedly referred to all who left Sweden under Olsson’s leadership.  A careful check of the records of the Bethany Lutheran Church accounts for 110 individuals – men, women, and children – who came directly to Lindsborg from Sweden in 1869, excluding those known definitely not to have been associated with the Olsson party. It is possible to account for only thirty-five [35] families. Included in the total figure of 110 were thirty-nine [39] children.  Twenty [20] single men came to Lindsborg in 1869 on the basis of the records. 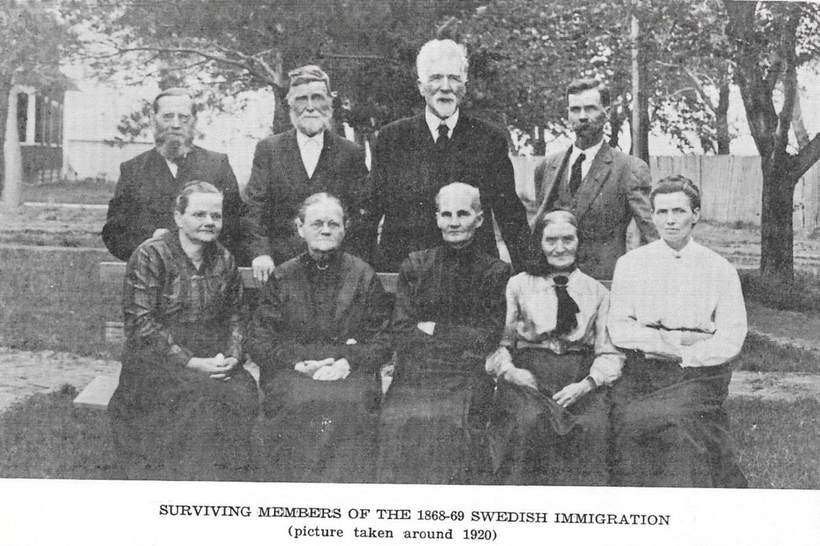 Swedish Founder and First Pastor
of the
Swedish Evangelical Lutheran Bethany Church
who officially led the first Swedish party from Värmland to settle in
Lindsborg, Kansas.
(He would become the third President of Swedish Evangelical Augustana Lutheran College.) 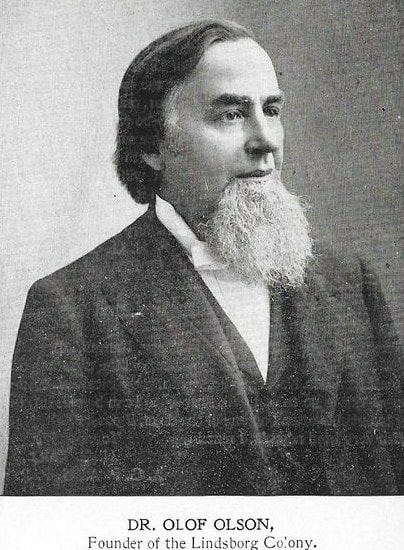 Overlooking the Mississippi River and  Bettendorf and Davenport, Iowa is the final resting place of Lindsborg's beloved Pastor Olof Olsson and his wife Anna Olsson.  They are laid to rest in Moline, Illinois, Riverside Cemetery, a few miles from Rock Island, Illinois, where he served as Augustana College's third president from 1891 - 1899. 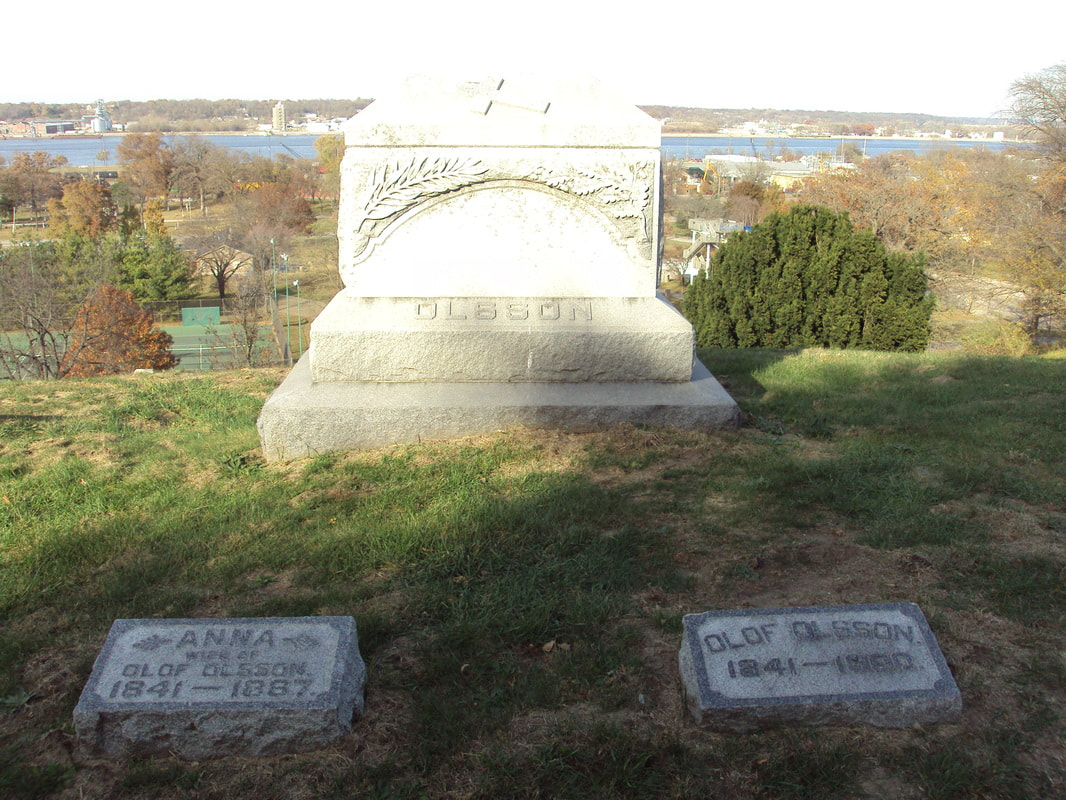 All color photography throughout SwedishAmericana is by Fran Cochran unless otherwise indicated.
Copyright © 2021 www.swedishamericana.org  All rights reserved.
[ Back to Top ]